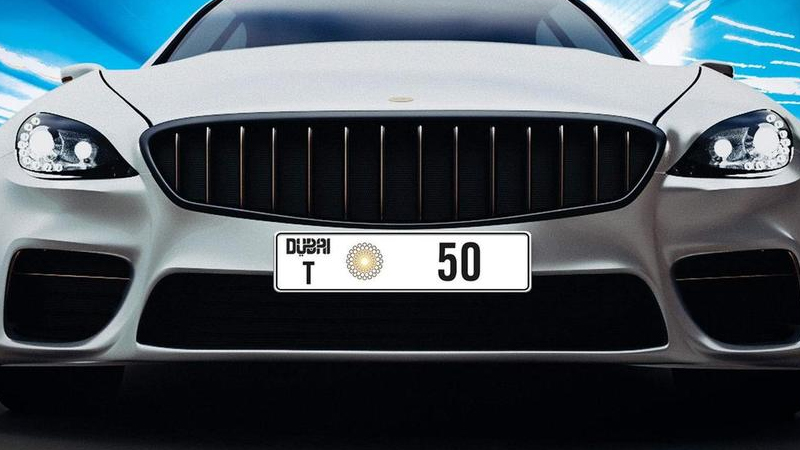 With just a year left for the world’s biggest show, the Road and Transport Authority (RTA) announced the launch of 20 unique number plates to be put up for auction as an attempt at spreading awareness about it.

Over the years, the RTA number plate auctions have proved quite popular in the UAE. Unique number plates are sold for over millions of dirhams. One such number plate was a D5 plate which was bought by a businessman named Balwinder Sahani for an insane amount of 33 million dirhams in the year 2016.

The number plates that were auctioned are deemed special and unique owing to the Expo 2020 logo they will carry. Also, these Expo 2020 number plates are being offered for the first time in the history of RTA number plate auctions.

Number plates that were up for sale held the letters H to Z with the exemption of J and Y.

As you might have guessed, “T 50” which is a part of an electrifying collection of number plates was also up for action and was sold for an astonishing 2.44 million AED.

The auction was held on the 28th of September InterContinental Dubai Festival City Hotel which was a Saturday and bidding started at 4.30 PM.

These auctions fetch a good amount of money for the RTA. The 2017 auction saw $7.56 million raised for the auction of 80 plates. An Indian businessman in Dubai holds the record for the highest bid ever for RTA. In 2016 he had bid for a D5 plate for $8.9 million! This speaks volumes about the level of enthusiasm and participation by Dubai’s residents and expats for the VIP number plates.

The auction which took place on the 28th of September was the 102nd distinctive car number plates public auction and amassed over 25,138,000 AED. The highest grossing number plate was the ‘T 50’ number plate followed by the ‘L 21’ number plate bearing the Expo logo which were sold for 2.44 million AED and 2.34 million AED respectively.

Take it easy: Rent a car with driver in Dubai

Honda Dubai WR-V: What to expect